Actually, the Pacific NW division is literally doing the exact opposite: keeping the world from being set on 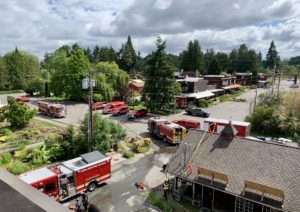 fire. How so? By doing a good deed for its neighbors, in this case almost 500 first responders in and around Bothell, WA, a suburb of Seattle.

Pulte is set to develop a second phase of its 202-unit Urbane Village townhome community on an adjacent land parcel known as Country Village, a former collection of shops and restaurants that closed earlier in the year. But before the site of those now-shuttered shops, buildings and alleyways is redeveloped for Pulte townhomes, the entire “village” is being used as a live action training site for fire departments in Bothell and the surrounding region.

After Pulte acquired the Country Village parcel in 2017, the Bothell Fire Department reached out to Pete Lymberis, Division VP for Land, to ask about using the shops and buildings on the back portion of the site for training before Pulte launched development. Pete was all for the idea, and with the help of Jim Sprott, also on the Land Development team, he was finally able to give the

Department the green light for local fire fighters to use the site through the end of July.

With the official forecast of “above normal, significant large fire potential” along the West Coast for the heart of wildfire season in August and September, first responders can use every opportunity to train not only for wildfires but for emergencies they respond to every day. The training at the Bothell site includes all types of exercises intended to replicate real life situations, such as search and rescue, vertical ventilation using ladder trucks, and a firefighter survival course with zero visibility (using smoke bombs). While no burning is allowed, all of the training at Country Village will help prepare emergency responders for the dangerous and lifesaving work they are called upon to do when the real thing strikes.