A Minute with Marshall: The Strength of the Human Spirit is Without Bounds 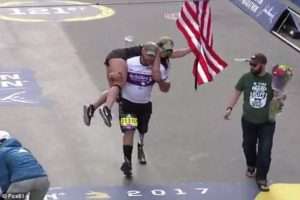 Did you see this?  This young man is Earl Granville as he finished this year’s Boston Marathon. His passenger is Andi Piscopo, his running guide, who, in a moment of unbridled joy, he decided to carry the last 50 feet of the race.  Just a few short years ago, the end of the Boston Marathon was the scene of terror and destruction, but this year Earl and Andi changed it to one of joy and triumph.

Earl was a member of the Pennsylvania National Guard when he lost his leg in 2008 to a road-side bomb in Afghanistan.  His brother, who also served in the military, would later take his own life.  Earl, by his own admission was in a dark place, but he refused to give up.  This picture is the end of a race much longer than the marathon itself.

I am sure Earl had help on his journey back from injury.  Providing support to our wounded veterans is why we created PulteGroup’s Built to Honor program.  From an idea in 2012 to the initial builds in 2013, Built to Honor is on track to deliver its 50th mortgage free home to an injured veteran and his/her family in 2017.

Having run marathons, I can tell you they are brutal under the best of circumstances.  I am in awe of the strength of heart this man displayed and of the heart you have shown over the years in supporting our Built to Honor program.